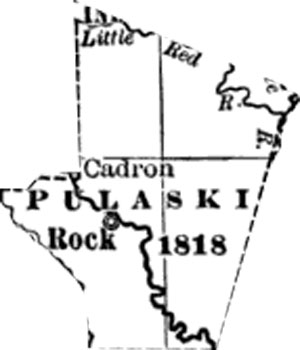 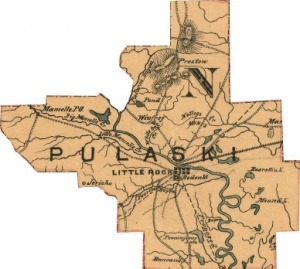 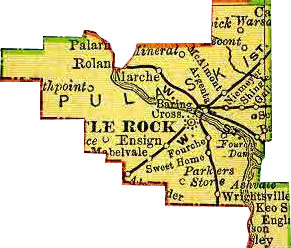 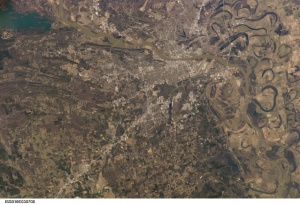 Pulaski County is the most populous county in Arkansas and home of the state capitol at Little Rock. The county was established on December 15, 1818, by the Missouri Territorial Legislature and is named for Count Casimir Pulaski, a Polish volunteer during the American Revolution. Pulaski is one of the five original counties forming Arkansas Territory in 1819. Many settlers came to the area from Missouri and Memphis following the Southwest Trail in the nineteenth century.

The county is bisected from northwest to southeast by the Arkansas River. The eastern part of the county sits in the flat Arkansas River valley plains. The western portion of the county is dominated by the foothills of the Ouachita Mountains, including the cone-shaped Pinnacle Mountain. The cities of Little Rock and North Little Rock sit astride what was once a natural ford of the Arkansas River along the Southwest Trail to Texas. The bluff on the south side of the river protected the city of Little Rock from flooding. Neighboring counties include Faulkner County, Lonoke County, Jefferson County, Grant County, Saline County, and Perry County.

The earliest known inhabitants in the area of Pulaski County were the Plum Bayou People, a mound building civilization with remnants still visible at Toltec Mounds east of the city of Little Rock. Around 1500 the Quapaw Indians began hunting in the region.

The first European explorer in what was to become Pulaski County was Frenchman Jean-Baptise Bénard de la Harpe who by tradition in February 1722 named two rocky outcroppings along the Arkansas River "La Petite Roche" (the "Little Rock") and "La Grande Roche" (the "Big Rock"). De la Harpe traded goods with local Quapaw Indians. The Quapaw (Ugahxpa, or "Downstream People") are a Native American tribe that may have migrated from the Ohio River Valley to the Lower Mississippi and Arkansas River valleys before the time of European settlement.

The first white settlers to the county may have been a party from the Carolinas led by John Gozel in 1806. The next year brothers John Pyeatt and Jacob Pyeatt settled at the present site of Crystal Hill, calling their settlement Pyeattstown. In 1820 Cadron Settlement became the official seat of government in the county. That same year the U.S. Post Office established mail service to both Cadron and Crystal Hill.

In 1821 Arkansas territorial administration shifted from Arkansas Post to Little Rock. In March 1822 Little Rock became the county seat of Pulaski County, and the state capitol in 1836. The county benefited from its location on the Arkansas River, which was accessible by steamboats. By 1830 the city welcomed about one steamboat each week. On the eve of the Civil War the city averaged ten such visits each week. Antebellum Pulaski County thrived on an economy based on corn and cotton exports to New Orleans.

During the Civil War the county witnessed military and civilian activity. In February 1861 the Little Rock Arsenal was attacked by Confederate forces and its store of ammunition, cannon, and other weapons seized. Under the leadership of Major General Samuel R. Curtis 22,000 Union soldiers feigned an attack on Little Rock in May 1862, causing the state legislature to disband. The city was captured in September 1863 by fourteen thousand federal troops under the command of Major General Frederick Steele. After the loss of Little Rock, state representatives established a new state capitol in Washington, Hempstead County.

In 1872 the county was the location of the infamous Brooks-Baxter War between rival gubernatorial candidates Elisha Baxter and Joseph Brooks. Baxter was elected and inaugurated on January 6, 1873, but found himself in U.S. Circuit Court accused of fraud by Brooks and a coalition of party representatives. Baxter was eventually exonerated by President U.S. Grant, but lost his seat in November 1874 when a convention drew up a new state constitution.

Pulaski County's economy continued to depend on cash crops in the late nineteenth century, but expanded to include many other specialized commercial activities. Jim Crow segregation also expanded.

Pulaski County, 771 square miles in extent, is composed of flat Arkansas River Valley delta farmlands in the east, rolling hills to the south, and Ouachita mountain foothills to the west. The western part of the county is dominated by Lake Maumelle and Pinnacle Mountain State Park.

Pulaski County is highly urbanized, but many areas of the county remain agricultural. In 2005 the University of Arkansas Division of Agriculture estimated that 118,426 acres of the county remained in farmland. According to the USDA the county contained 195,843 acres of timberlands in 2005. The county has 575 farms, making for an average farm size of 206 acres.

County government came to Pulaski County on May 24, 1819, with a first session at the home of Samuel McHenry. In 1820 the first General Assembly of Arkansas Territory located county government in the town of Cadron at the outlet of Cadron Creek along the Arkansas River near Conway.

Little Rock today is the county seat of Pulaski County as well as the state capitol of Arkansas. The Pulaski County Courthouse is located at 401 West Markham Street in Little Rock. The county judge is Floyd G. "Buddy" Villines. The circuit/county clerk is Pat O'Brien. The county sheriff is Doc Holladay. The county treasurer is Debra Buckner. The county assessor is Janet Troutman Ward.

The county has nineteen public and private high schools:

Other populated places in Pulaski County: