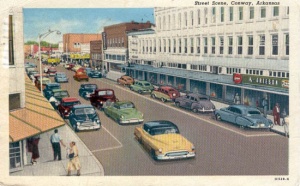 The downtown area of Conway is quaint and pleasant. Conway has at least two post offices. There is a wide variety of restaurants to choose from in Conway. There are of course, fast food places like Wendy's, Sonic Drive-In, and McDonald's. There are also places like Chili's Grill & Bar and Cracker Barrel. A favorite among some college students is Stoby's, located on Donaghey Avenue. Stoby's is known among some for their delicious cheese dip. There are two movie theaters in Conway. The Conway Commons offers excellent shopping. Stores such as TJ Max, Target, and Kohl's, provide a good shopping experience.

Conway is known as the "City of Colleges." The city hosts three institutions of higher learning: Hendrix College (founded in 1890), Central Baptist College (1892), and the University of Central Arkansas (1907). The area is also served by the Conway Public School District, St. Joseph School, and Conway Christian School.

The Conway Human Development Center on Siebenmorgen Road on the northeast side of the city is a residential facility for developmentally disabled people.

The city is home to the Conway Regional Medical Center.

Two city parks are Laurel Park and Gatling Park. The Faulkner County Fairgrounds are on Robins Street on the south-central side of Conway.

Conway's history dates to an 1871 decision to route the Little Rock and Fort Smith Railroad through Cadron Gap. The path through Cadron Gap and the Arkansas River to the west formed a natural choke point funneling traffic into the area from the north and west. The railroad's chief engineer Colonel A. P. Robinson received one square mile of land south of the gap, extending south roughly from what is today Prince Street to Dave Ward Drive. Robinson reserved the northeast corner of his property for the establishment of a town site, and the southern half as a private game reserve. He drove a stake in the ground at the place where Conway Station was to be constructed. A post office was built at Cadron Gap, but later transferred to Conway Station in 1872.

Conway was named and became the county seat of Faulkner County in 1873. P. H. Prince described the town in that year as follows: "There were two small stores and two saloons, a depot, a few temporary houses to live in and a post office. At the time there was not a single woman in or around Conway." The town was incorporated on October 5, 1875. Robinson personally pledged land for the courthouse square, and several local churches.

By the 1880s the town was served by two hotels near the train depot, Farrow House and Crosby House. The most notable saloon was owned by Ed Dunlap. Local physicians of the decade were A. Davis, A. C. Hoss, G. S. Brown, J. F. Kinchloe, and G. D. Dickerson. Law firms included those of Bowen and Bolton, Bruce and Cox, Harrod and Harrod, L. C. Lincoln, P. H. Prince, and G. W. Rice. General stores included M. and J. Frauenthal and Co., W. D. Cole, Grizzard and Gist, J. S. Jones, Van Ronkle, and J. N. Walton and Co.. Hardware, tinware, and famr implements were sold at Burton and Townsend. The town blacksmiths were A. Lachowsky and Sam Clifton. Pharmaceutical preparations were sold by druggists Davis and Hoss and A. R. Witt. Boots and shoes were made by J. Farar. M. Groves was a jeweler and sewing machine agent. Glenn and Ray, J. E. Martin and Co., Sneed and Co., Jesse Witt, and J.N. Walton and Co. sold groceries and other dry goods. A restaurant and confectionary operated under Jake Heiligers. Hilliard and Co. operated a planing mill and sold furniture. The editor of the Log Cabin newspaper was A. F. Livingston. Markham and Simmons operated a livery and feed store. The undertaker was J. A. Pence, who also made cabinetry. There was also the Rapier photography gallery downtown on Front Street, and a barber by the name of V. Yaeger on Oak Street. The town butcher shop was Sam Raburn's City Meat Shop. The local bakery operated under Frank Menton.

Conway sits at an average elevation of 312 feet.