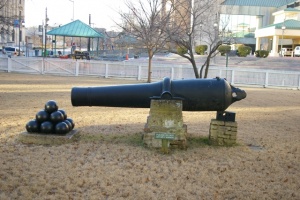 The Brooks-Baxter War during the Arkansas gubernatorial election of 1872 capped the Reconstruction era-struggle for political control of the state.

In that year Batesville Republican Elisha Baxter faced rival Republican Joseph Brooks, a Methodist minister, in the race for the governorship. Baxter was elected and inaugurated on January 6, 1873, but found himself in U.S. Circuit Court accused of fraud by Brooks and a coalition of Republican party representatives. The Pulaski County court agreed, declaring Brooks the next governor of the state. Both sides immediately began raising militias numbering around 2,000 men. Baxter was eventually exonerated by President U.S. Grant and seated, but he lost his seat in November 1874 when a convention drew up a new state constitution.

In May 1874 Uriah Rose argued for the side of Elisha Baxter.

A cannon that still sits on the grounds of the Old State House is named Lady Baxter. The cannon was last fired in celebration of the end of the Brooks-Baxter War.