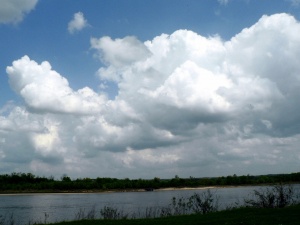 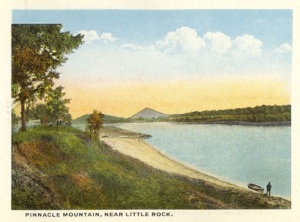 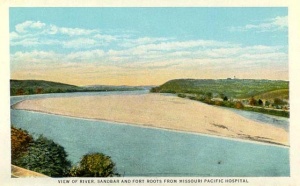 The Arkansas River is the sixth longest river in the United States (1,469 miles). In Arkansas the river cuts through the Ozark Plateau in the west and the Ouachita Mountains in the central part of the state, before meandering through the Mississippi River Alluvial Plain to the east. The river is part of the McClellan-Kerr Arkansas River Navigation System operated by the Army Corps of Engineers.

The Arkansas River enters Conway County a few miles above Petit Jean Mountain. It passes through the Arthur V. Ormond Lock & Dam before passing by the county seat of Morrilton. Below Morrilton the river divides around Ellis Island. The river rounds Cypress Bend and bypasses an oxbow lake using the Morrilton Cutoff before entering Faulkner County. The river passes pioneer Cadron Settlement before passing under the Toad Suck Lock & Dam. The river curves around Hickmans Bend, Benedicts Bend, Devils Bend, and Fletcher Bend before entering Pulaski County at Palarm. At Maumelle the river passes around Reids Bend and through Rector Chute on its way to Murray Lock & Dam. At Burns Park the river rounds Greathouse Bend. Along the river in downtown Little Rock is the historic landmark La Petite Roche ("the little rock") from which the city derives its name. Near the Little Rock National Airport the river moves around Peach Orchard Bend and Gates Island. Below the city is the David D. Terry Lock & Dam. The river flows due south at this point, exiting the county near Tar Camp Park.

An expedition led by Lieutenant James B. Wilkinson descended the river in canoes. The group entered the river in Colorado and arrived at Arkansas Post on January 9, 1807.

The McClellan-Kerr Arkansas River Navigation System is a system of navigable pools on the Arkansas River formed from seventeen locks, dams, and reservoirs extending from the Port of Catoosa near Tulsa, Oklahoma, to Montgomery Point near Dumas on the Mississippi River. The McClellan-Kerr Arkansas Rover Navigation System is operated by the U.S. Army Corps of Engineers - Little Rock District in Little Rock and Tulsa.

The $1.2 billion McClellan-Kerr system dedicated on June 5, 1971, by President Richard Nixon was the result of several decades of effort to improve port facilities, transportation, and flood control on the Arkansas River. As early as 1941 Senator Hattie Caraway and Representative Clyde T. Ellis lobbied in favor of an Arkansas River Valley Authority. Their efforts went unrewarded, but in 1956 Arkansas Senator John L. McClellan and Oklahoma Senator Robert S. Kerr secured passage of public works funds for waterway improvements and hydroelectric power generation. The district engineer in Little Rock responsible for construction of the Arkansas portion of the system was Colonel Charles L. Steel.

In 2008 slightly more than two million tons of commodities were transported over the system. Commodities moved in 2008 included petroleum products, iron, steel, fertilizers, sand, gravel, rock, and soybeans and other agricultural products.

The Arkansas River Historical Society, founded in 1981, preserves the history of human activity along the Arkansas River and educate the public on river's role in mid-South life. The society operates a museum at the Port of Catoosa in Tulsa, Oklahoma.