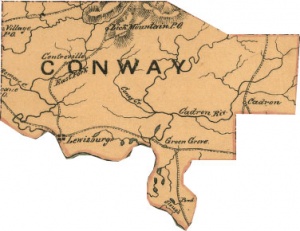 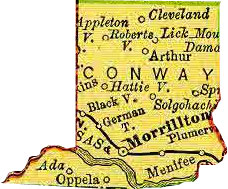 Conway County was established on October 20, 1825, from lands carved away from historic Pulaski County.

Conway County comprises 556 square miles of territory. The county is characterized by farmlands, cattle ranches, thick pine forests, Ozark and Ouachita foothills mountain ranges, mountains, and lakes. The county is drained in the south by the Arkansas River and Cadron Creek. Cedar Falls is among the tallest waterfalls in the American South. Two notable lakes in the county are Overcup Lake and Brewer Lake. Brewer Lake is the water supply for the city of Conway.

Interstate 40 passes east-west through the southern part of the county. U.S. Highway 64 parallels the interstate just to the south, and passes through Menifee, Plumerville, Morrilton, Kenwood, and Blackwell. Scenic Arkansas Highway 9 passes through the county from the northeast to the southwest, passing through Center Ridge, Birdtown, Solgohachia, Overcup, Morrilton, and Oppelo.

The Conway County Courthouse is located in Morrilton. The county judge is Jimmy Hart.

Many visitors to the country come for the natural beauty and recreational facilities at Petit Jean State Park. The park is considered the "flagship" of the state's extensive park system. The park is known for natural features like Cedar Falls, Bear Cave, and Rock House Cave. Other places of interest on top of Petit Jean Mountain are Winrock Farms and the Museum of Automobiles.

Conway County has three incorporated cities within its boundaries: Morrilton, Oppelo, and Plumerville. It has one incorporated town: Menifee.

Other populated places in Conway County: