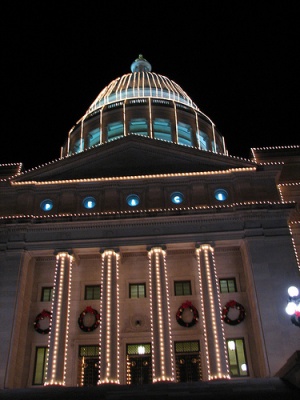 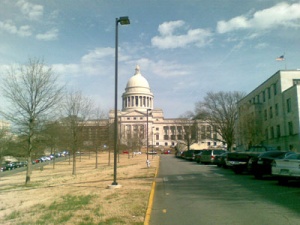 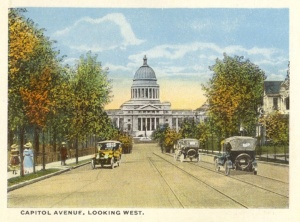 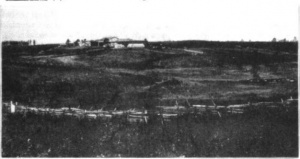 The Arkansas State Capitol is a Neoclassical, limestone executive and legislative government building situated at the corner of Woodlane & Capitol streets on the western edge of downtown Little Rock. The Governor's Office is located on the second floor of the building. The Capitol gardens and Liberty Bell Pavilion are open to the public.

Legislators were prompted to consider the move out of the Old State Capitol (better known as the "Old State House") after a partial roof collapse in 1899. The Capitol Building sits on the site of the former Arkansas State Penitentiary and was constructed with prison labor between 1899 and 1915. The State Capitol's cornerstone was laid on November 28, 1900. The estimated cost of the capitol building was $1 million. By the time of its completion the cost had swelled to $2.5 million.

The building features a 230-foot dome, a twelve-foot chandelier, and three sets of Tiffany brass doors purchased for $10,000 and installed in 1910. The Capitol was designed by George R. Mann, and is listed in the National Register of Historic Places.

The Arkansas State Capitol looks much like the U.S. Capitol and has been used several times as an alternate shooting location for D.C.-related films. The 1986 movie Under Siege, for instance, was filmed here.