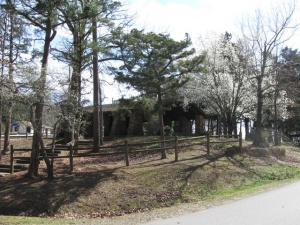 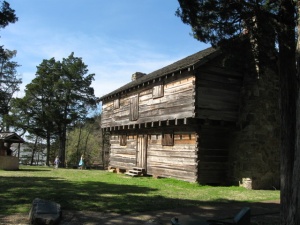 An Indian village preceded the establishment of a white community at the original site of Cadron Settlement. Cadron Settlement was possibly first visited by Spanish explorer and conquistador Hernando de Soto in 1541. French hunters established a fort here around 1807 that they called Quadran. In 1810 Notrebe fur trader William Frazier visited the site to trade for pelts and furs, and noted that his colleague John McElmurray had already established a prosperous trading post at the site, which was occupied by "not less than one hundred hunters, both whites and Indians." Across the river to the west a plantation had already been established by Major John Pyeatt. Jacob Pyeatt moved to the site of Cadron in 1815 with his wife Margaret. She died in 1822. Pyeatt was the Pulaski County coroner from 1818 to 1821.

Botanist Thomas Nuttall arrived at Cadron in 1818. He reported a store operating under the proprietorship of Richard Montgomery. Other residents Nuttall found living there included John McElmurray - with his children David McElmurray, Robert McElmurray, John McElmurray, and Harvey McElmurray - Benjamin Murphy, Harvey Hager, and Lemuel Curran. Nuttall reported that the fondest wish of the residents was that they acquire "a house of public entertainment, a tavern." Nuttall noted that the Cadron Settlement lay on the trail for settlers destined for the White River and Red River settlements, as well as those headed for the "hot springs of the Washita."

Cadron lots were auctioned off for the first time in May 1818. At about that time John C. Benedict and his family settled at Cadron. Other nearby settlers included Adam Kuykendall - with sons Amos Kuykendall, Peter Kuykendall, Adam Kuykendall Jr. - Charles Adams, Reuben Eusten, Thomas Burrows, John Burrows, and James Lemons.

Nuttall departed the settlement and then returned from December 18, 1819-January 4, 1820 to wait out difficult winter weather. Nuttall notes that the "transients" at the settlement were "swallowed up in dram-drinking, jockeying, and gambling; even our landlord, in defiance of the law, was often the ring leader of what it was his duty to suppress." Major Stephen H. Long visited the site on his expedition of 1817-1818. Dwight Mission to the Cherokee founder Cephas Washburn visited the settlement in 1819.

In 1820 John Pyeatt began cutting trees and clearing out brush for a wagon road leading from Cadron to Arkansas Post. That same year Thomas H. Tyndall arrived and established the first post office. Mail was posted to Arkansas Post every other week. A second post road was established on May 3, 1820, putting the settlement in contact with the Pulaski County Courthouse, the Hempstead County Courthouse, and the Wachita County Courthouse. Mail also began arriving along this road from New Orleans. Soon the settlement became part of the Butterfield Mail Route from Memphis to San Francisco.

By 1820 the settlement had 717 residents, compared with 1,923 in Pulaski County as a whole. (Cadron was then part of Pulaski County.) On June 28, 1820, the first General Assembly of Arkansas Territory located county government in the town of Cadron. The Assembly approved the construction of a jail and courthouse on October 23, 1820, but these were not built. On October 21, 1821, acting territorial governor Robert Crittenden approved the removal of the county seat to Little Rock.

Cadron became a leading candidate for the site of the Arkansas state capitol. On February 22, 1820, Joab Hardin drafted a bill making Cadron the site of the capitol. This bill was rewritten in committee to redirect the site to Little Rock, but was tabled by the legislature. When the new legislature convened in the fall, a new bill naming Little Rock the capitol was passed. The governor signed this bill into law on October 21, 1820.

On November 3, 1824, Conway County was formed out of part of Pulaski County. A temporary court was established in a log home at Cadron. After much wrangling, in 1831 the county seat was removed to Lewisburg.

Seven to eight hundred Cherokee Indians stopped here on April 8, 1834, during a period of low water in the river. The Steamboat Yeatman was transporting them to reservations in Oklahoma. A small Cherokee Trail of Tears Memorial is located in the park in memory of the eighty-six Native Americans who died here in 1834 of what was called the "summer (or bowel) complaint," and is now called cholera.

During the Civil War Iowa troops may have fought a major skirmish with the Confederates at the site of Cadron.

The presence of Cadron Ridge south of the settlement made it necessary to build the Little Rock and Fort Smith Railroad two miles north. After the rails were laid in 1874 the town withered away.

The park is notable for its replica of an eighteenth-century blockhouse, which originally protected settlers from marauding Osage Indians, and for Cadron Creek which provided a fresh water supply. In the early nineteenth century the original blockhouse served as the residence of John McElmurry and his family. The replica blockhouse was constructed in 1979 from native cypress logs with funding from the Conway Chamber of Commerce and the Faulkner County Historical Society.

The park has a boat launch, trails, a pavilion, and restrooms. Tollantusky Trail is named for an Arkansas Cherokee chief who is believed to have lived in Cadron Settlement from 1809 to 1817.