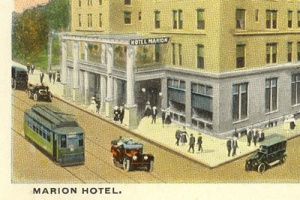 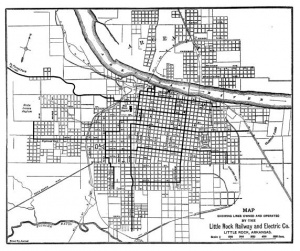 On March 3, 1891, the Capitol Street Railway Company swallowed up all the franchises in the city and adopted the name of the City Electric Street Railway Company. City Electric had at this time twenty-two miles of track, forty-five streetcars, and 308 horses and mules. The company divested itself of its last animal power on November 22, 1891. Two days later it debuted the first of twenty-eight new electric streetcars. The Little Rock Traction and Electric Company incorporated on June 3, 1895, and took over all the lines in the city.

The longest line in the system was the Pulaski Heights Line running from Main Street downtown to the White City (formerly known as Forest Park). This route was completed in 1904. Because the route to Pulaski Heights was steep, the railway required several switchbacks. Eight double-end lightweight cars purchased from the American Car Company in 1924 ran in this track. These cars were numbered from 400 to 407. A one-way ride over the complete route took approximately thirty minutes. The line operated a car barn inside White City, which was owned by the railway company.

The South Main Line was a twenty-five block loop of track located downtown. At one end of the loop was the passenger station of the Missouri Pacific Railroad. Cars traveled from this station along Markham Avenue and then south onto Main Street. The [[[Fifteenth Street Line]] was serviced first by Birney cars and then by the older double-end, double-truck streetcars. The Fair Park Line was double tracked along its entire length. It originally served West End Park (now occupied by Central High School, Kavanaugh Field, and Highland Park. The Biddle Shops Line left the South Main Line at the intersection of 21st and Main streets and continued east and south to Confederate Boulevard. The line had been constructed in 1914 for $35,925. Streetcars numbered in the 200s were used on this line. The West Ninth Line ran from Ninth & Main through the African-American business district of the city. The line followed High Street south to Braddock's Park (originally called Wonderland Park) on 35th Street. The line was no longer in operation by 1930. The Rock Island Station Line terminated at the Rock Island Railway Station. The South Highland Line deviated from the Fair Park Line at the intersection of Thirteenth and Woodrow streets. It followed Woodrow south to 19th Street before turning west and ended at Asher and 29th streets. The East Fourteenth Line turned off at Fourteenth and Main streets passed through the residential neighborhoods near old Little Rock High School and Oakland Cemetery. The line ended with a loop at Eighteen and College streets.