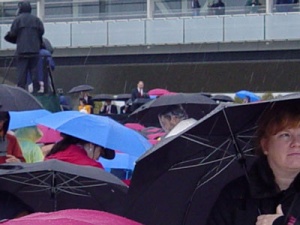 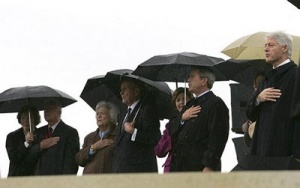 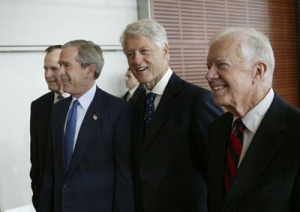 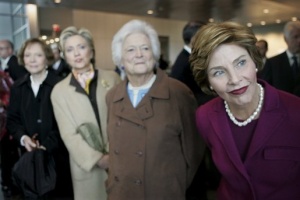 The William J. Clinton Presidential Center and Park was dedicated on November 18, 2004. An estimated 27,000 people attended the outdoor dedication ceremony in a driving rainstorm.

Bill Clinton, recovering from a recent heart bypass operation, recounts the events of the day in his biography My Life: "Two weeks after the election [of George W. Bush], we held the opening of my library, museum, and presidential center in Little Rock. Twenty-five thousand people braved a heavy rain to hear President Bush as well as former Presidents Bush and Carter speak. Six Americans talked about the impact of my policies on their lives and work. A group of children from Colombia, whose efforts against narco-trafficking and terrorism I had supported, sang and danced. So did Bono and the Edge of U2, marking my work for peace in Northern Ireland."

In his prepared remarks for the dedication, Clinton spoke of American political heritage and of building a bridge - symbolized by the Clinton Library building jutting out over the Arkansas River - from that noble past into the next century. "I believe the job of a president is to understand and explain the time in which he serves, to set forth a vision of where we need to go and a strategy of how to get there, and then to pursue it with all his mind and heart, bending only in the face of error or new circumstances and the crises which are unforeseen, a problem that affects us all. When I became president, the world was a new and very different place. And I thought about how we ought to confront it. America has two great dominant strands of political thought; we're represented up here on this stage: conservatism, which at its very best draws lines that should not be crossed, and progressivism, which at its very best breaks down barriers that are no longer needed or should never have been erected in the first place. It seemed to me that in 1992, we needed to do both to prepare America for the 21st century."

Former president Jimmy Carter summed up the mood of the event, involving as it did a rare show of bipartisanship at the conclusion of a presidential election season revealing a deeply divided nation. "At the end of a very difficult year - more difficult for some of us than others - it is valuable for the world to see two Democrats and two Republicans assembled together, all honoring the great nation that has permitted us to serve."

41st president George H.W. Bush reminisced about the 1992 campaign against Clinton at the dedication ceremony. "Of course, it always has to be said that Bill Clinton was one of the most gifted American political figures in modern times. Trust me: I learned this the hard way. And here in Arkansas, you might say he grew to become the Sam Walton of national retail politics. And seeing him out on the campaign trail, it was plain to see how he fed off the energy and the hopes and the aspirations of the American people. Simply put, he was a natural and he made it look too easy. And, oh, how I hated him for that!"

Remarked sitting president George W. Bush at the dedication: "President Bill Clinton led our country with optimism and a great affection for the American people, and that affection has been returned. He gave all to his job, and the nation gave him two terms. Arkansas is a state that knows political skill when you see it. A fellow in Saline County was asked by his son why he liked Governor Clinton so much. He said, 'Son, he'll look you in the eye, he'll shake your hand, he'll hold your baby, he'll pet your dog all at the same time.'" While he spoke the Secret Service plied the waters of the nearby Arkansas River in orange gunboats.

Bono and The Edge performed "Rain" by the Beatles at the dedication. Wrote Clinton in his autobiography: "Bono got a good laugh when he sang, 'when the rains came, we got four Presidents out of bed.' Coming so soon after an intensely fought election, the bipartisan spirit seemed to lift the country. President Carter spoke warmly of our long association, going back to his 1976 campaign. The first President Bush stole the show with an often hilarious account of our 1992 battle and a touching affirmation of our personal friendship. And the President was extremely warm and generous to me and my family, as he had been a few months earlier at the White House ceremony to unveil the official portraits of Hillary and me."

The dedication featured more than a dozen other musical performances. Pentecostal church singer Mickey Mangun, who performed at both of Clinton's inaugurations, sang the "Battle Hymn of the Republic" and Phil Driscoll performed "My Country, 'Tis of Thee" at the dedication.

Four F-16s from the 188th Fighter Wing known as the "Flying Razorbacks" streaked overhead at one point during the ceremony. The event culminated with the ritual presentation of keys to the Library from Chelsea Clinton to U.S. Archivist John Carlin of the National Archives and Records Administration.

Following the public dedication ceremony, which lasted from shortly after 10 AM until 1 PM, the former president and 1,300 guests visited the Clinton Library museum and attended a luncheon under an enormous white tent complete with eight chandeliers and catered by Quentin Turner, manager of the new Café 42. The luncheon featured Arkansas trout and chicken with barbecue sauce.

Just before offering a toast President Bush spoke addressed the assembled luncheon guests: "One man's journey from Hope, Arkansas to the White House -- the story told in this library -- is an American story. It's a story of talent recognized early and lifelong friendships and hard work that was rewarded. The boy who shook the hand of John F. Kennedy in the Rose Garden has shaken the hands of many young people, and inspired them with his idealism. And this library will carry that message into the future."

The week of the Library dedication ceremony witnessed a number of tie-in events. The first of such festivities was a Fun Run on November 13th, but included book-signings, a fashion show, plays, film festival, lectures, and the largest fireworks display in state history.

A number of other celebratory events tied to the official Clinton Library dedication took place between November 14 and 18. Al Franken performed at the Arkansas Repertory Theatre on November 15th. Aretha Franklin, the Queen of Soul, performed a special concert on November 16th with the Arkansas Symphony Orchestra at the Robinson Center. Ticket prices for the Aretha concert ranged from $115 to $300.

The Butler Center hosted an exhibition of memorabilia from all nineteen presidents since Herbert Hoover who visited the state of Arkansas. The exhibit, called "Presidential Pathways in Arkansas" featured life-sized cutouts of the presidents, beside which visitors could pose, and a replica arch dating to a visit by Theodore Roosevelt in 1905. The Arkansas Arts Center sponsored an exhibition entitled "Art and the White House: Presidential Selections, 1960-2000." The collection included paintings that former presidents borrowed to hang in the White House. The Arts Center also displayed the work of Diana Walker, a photojournalist who had access to private moments with several presidents. The William F. Laman Public Library sponsored a number of local Ozark musicals and plays.

American astronaut and U.S. Senator John Glenn opened an exhibit on "Space and the Presidency" at the Museum of Discovery down the street from the Clinton Library. The nearby Little Rock River Market featured a special Presidential Pavilion fall market from November 16-18. The market sold locally harvested produce and featured the artisanry of local Arkansans. The Statehouse Convention Center offered an exhibit of shoes worn by past presidents, including a pair owned by Abraham Lincoln. Even Central High School got into the act, offering a special lecture by Janis F. Kearney, official diarist to President Clinton.

The dedication celebration concluded with what has been called "Arkansas' largest-ever fireworks display."