From FranaWiki
(Redirected from Museum of Discovery)
Jump to:navigation, search 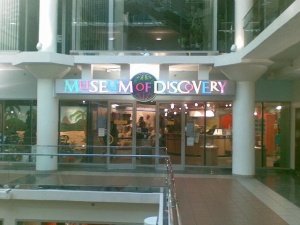 Entrance to the Museum of Discovery in the Museum Center of Little Rock. Photo by Phil Frana.

The Arkansas Museum of Discovery is a children's science and history museum in the Museum Center in the heart of the Little Rock River Market. The museum was founded on Main Street in 1927 by Julia Burnell "Bernie" Smade Babcock as the Arkansas Museum of Natural History and Antiquities. The original artifacts were donated by missionaries. One of the most popular artifacts on display was the so-called "Head of a Chicago Criminal."

As the oldest museum in Little Rock, it continues to educate people of all ages. The museum has both permanent and seasonal exhibits that encourage children to learn using hands-on experiments with electricity, robotics, light and color, anatomy, architecture, and state history. During a week of celebration in anticipation of the opening of the Clinton Library in November 2004 U.S. Senator John Glenn opened an exhibit on "Space and the Presidency" at the Museum.

The Museum of Discovery was accredited by the American Association of Museums in 1993 and became a Smithsonian Affiliate in 2003. It is also the center for the Arkansas Discovery Network, a program affiliated with the Donald W. Reynolds Foundation. Hours for the Museum of Discovery are Monday through Saturday from 9 AM to 5 PM and Sunday from 1 PM to 5 PM.