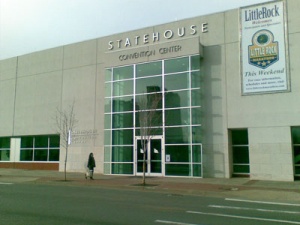 Bill Clinton held his gubernatorial inauguration balls in this convention center, and the site was the gathering place for print and television media during the presidential election nights of 1992 and 1996.

In 1999 the convention center underwent a $22.5 million renovation and expansion.

The Statehouse Convention Center is located at the corner of Markham & Main.