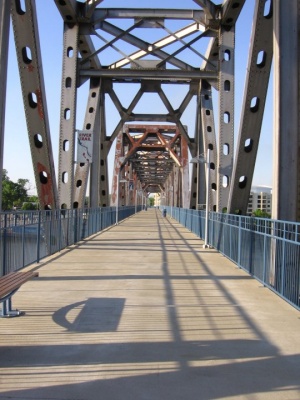 The Junction Bridge is an old railway bridge spanning the Arkansas River between North Little Rock and Little Rock, Arkansas. The bridge was converted in 2008 by the Junction Bridge Facilities Board for pedestrian and bicycle use as part of the Arkansas River Trail. Its connects the popular River Market with the Argenta Historic District, ALLTEL Arena, and Dickey-Stephens Park. The bridge also completes a loop on the Arkansas River Trail formed by trails on the north and south sides of the river and the pedestrian-friendly Big Dam Bridge located seven miles to the west. The bridge reopened to pedestrian traffic on May 17, 2008, with a ribbon-tying event symbolizing the new connection between the cities of Little Rock and North Little Rock.

North Little Rock paid $225,000 for their share of the project. Little Rock allocated $447,000. A matching grant of $1.6 million from the Arkansas State Highway and Transportation Department, $3 million in federal grant money, and Pulaski County paid the remainder of the $5.8 million project. The engineering assessment of the bridge, which included underwater study, was done by McClelland Consulting Engineers. McClelland Engineers also worked out a method to raise the lift span once used to allow ships to pass through and secure it permanently in place. Reconstruction and retrofitting on the bridge deck was accomplished by May Construction Company.

The Junction Bridge Collaborative, composed of county board officials and local citizens, is currently exploring the idea of turning the structure into a "inhabited bridge" complete with attached restaurant, hotel, or office building on the North Little Rock side. The collaborative is exploring the option of pulling a number of stainless steel rail cars onto the bridge as covered restaurant spaces. The bridge is under the immediate management of the Bridge Facilities Board.