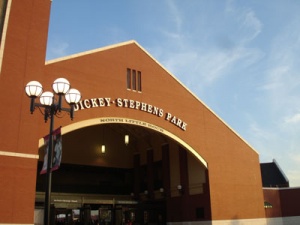 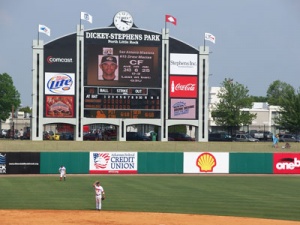 Dickey-Stephens Park is the home stadium for the AA Arkansas Travelers baseball team. The stadium is located at 400 West Broadway on the Arkansas River in North Little Rock. The ballpark was built by East Harding Construction. It was ready for the start of the 2007 season, opening April 12, 2007. The park was funded by a voter-approved 1 percent sales tax. The Arkansas Travelers, Little Rock financier Warren Stephens, and the City of North Little Rock cooperated to build the park.

Warren Stephens named the park in honor of the Stephens Inc. founders Jack and Witt Stephens. The park's other namesake is attributed to hall of fame catcher Bill Dickey (17 years with the New York Yankees and 7 World Series titles) and his brother Skeeter Dickey (also with Major League experience), both of whom worked for Stephens Inc. after their baseball careers.

The park was designed by HKS Architects based out of Dallas,TX. The park's seating capacity is fixed at 5,800. The stadium is a bit infamous for the line drive foul ball that hit Tulsa Drillers' batting coach Mike Coolbaugh in the neck. Dickey-Stephens won the Baseballparks.com ballpark of the year for the year 2007 because of its distinct "baseball-feel" instead of the common "country-club feel." Attendance for the first season in the ballpark was 372,475. The former club record at Ray Winder Field was 296,428 in 1989.

Little Rock failed to approve a site for the ballpark initially, but Warren Stephens, gazing out of the Stephens (blue-glass) building, laid eyes on an undeveloped stretch of land north of the river. He promptly purchased this 11.6-acre property for $5.8 million. He then donated this land to the city of North Little Rock, stipulating that (1) the land must be used for a ballpark and (2) he would get to name the ballpark. The park was constructed at the junction of the Broadway Bridge with Broadway Avenue in North Little Rock. Fans normally park on the Little Rock side of the river and walk across the river to the park.

Dickey-Stephens is the home of Bill Valentine's Ballpark Restaurant. This Italian eatery is known for its steamed mussels, veal chop, and cannoli. Bill Valentine is executive vice president, chief operating officer, and former general manager of the Arkansas Travelers.

Dickey-Stephens is also home to the Travelers Baseball Museum, which opened on April 3, 2008. Said Valentine on an advance tour, "We've probably got more stuff than any team in the minor leagues. Just a host of things you wouldn't find anywhere else in America." Some of the equipment on display dates back to the 1920s. Texas League trophies and photos of every team since 1955 are also on display. The museum charges an admission of $1.