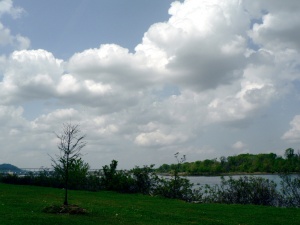 View of the Arkansas River near the Big Dam Bridge. Photo by Megan Davari. 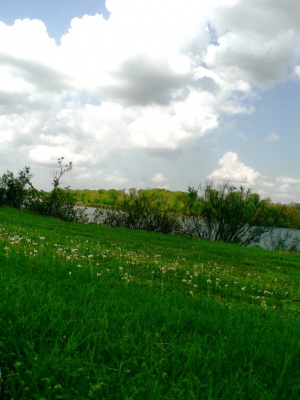 View of the Arkansas River near the Big Dam Bridge. Photo by Megan Davari.

The Big Dam Bridge (also known as the "Pulaski County Pedestrian and Bicycle Bridge," the "Murray Lock and Dam Bicycle Pedestrian Bridge," or simply "Buddy's Bridge") is the longest longest purpose-built pedestrian/bicycle bridge in the world. The bridge spans 3,463 feet of the Arkansas River, and with approaches on each side measures 4,300 feet total in length. The bridge deck is fourteen feet wide, accommodating traffic in both directions. The Big Dam Bridge is mounted atop the Murray Lock and Dam - including its navigation channel and hydroelectric power plant - by 38 separate columns. In some places the bridge is 30 feet above the dam and 65 feet above the level of the river.

The bridge received its name from Pulaski County Judge Floyd G. "Buddy" Villines, a leading advocate of the project, who once told skeptics at a quorum court meeting, "We're going to build that dam bridge." Villines conceived of the bridge project and way to bring the sister cities of central Arkansas closer together and to promote exercise: "Bridges connect people and places. This one will attract people and be good for economic growth. Plus our culture has to change its ways. We have to be healthier."

The Big Dam Bridge cost $16.5 million to build. The federal and state government contributed $12.5 million to the bridge's construction costs, and Pulaski County picked up about $4 million of the tab. Illumivision Lightwave LX LED lighting for the bridge cost $887,788. Senator Blanche Lincoln said of the project's expense: "This money will finally give pedestrians and bicyclists in Pulaski County a safe, reliable Arkansas River crossing. The River Trails project will give residents more recreational opportunities to take full advantage of the natural beauty this area offers, not to mention all of the tourism it will bring to the area."

The bridge was constructed by the Little Rock District of the U.S. Army Corps of Engineers. The Corps project manager on the Big Dam Bridge was Jim Pfeifer. The structure, which contains three million pounds of steel, was designed by Garver Engineering. The general contractor on the bridge was Jensen Construction, working under superintendent Steve Ulmer. Bluegrass Bit subcontracted on the project, modifying the Murray Dam to accommodate the vertical columns supporting the bridge structure. Eight steel observation towers, lighting, and flagpoles representing all eleven cities in Pulaski County were designed by George Wittenberg III of the University of Arkansas at Little Rock Donaghey School of Urban Design. Other participants in the project were the City of Little Rock, the City of North Little Rock, the Arkansas Highway and Transportation Department, the Arkansas Game and Fish Commission, the Arkansas Department of Health, the Arkansas Department of Heritage, the Arkansas Department of Parks and Tourism, the U.S. National Park Service, Heifer Project International, the Governor's Council on Fitness, the Boy Scouts of America, Audubon Arkansas, the Nature Conservancy, Bicycle Advocacy of Central Arkansas (BACA), the Little Rock Convention and Visitor's Bureau, the William J. Clinton Foundation, the Rails to Trails Conservancy, MetroPlan, and the U.S. Federal Highway Administration.

An African-American cemetery dating to the nineteenth century is located at the south entrance to the bridge. The Chain of Rocks Bridge across the Mississippi River in St. Louis, Missouri, at 5,350 feet is a longer pedestrial-bike bridge, but began life as auto highway Route 66.