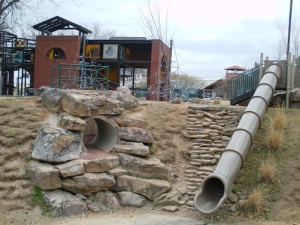 Peabody Park is an extension of Julius Breckling Riverfront Park located behind the Peabody Hotel in downtown Little Rock. The park, formerly called Riverfront Park West, features a pavilion, climbing area with eight-foot walls, a "tree room," concrete tunnels, and spray fountain with waterfall. The project calls for the placement of a number of sandstone boulders of several hundred tons each. The park is inspired in part by Richard Louv's book Last Child in the Woods: Saving Our Children from Nature-Deficit Disorder, which at-large City Director Dean Kumpuris had read. Kumpuris also convened a special meeting to draw ideas from local young people. Said Kumpuris, "The children told us what they wanted. They made drawings and told us flat out what they did and didn't want in their park."

Peabody Park is located on the South side of the Arkansas River, near the River Market district. It’s also very near Junction Bridge, the old train bridge converted into a pedestrian bridge to cross over the river. Across the river at the other end of the bridge is Verizon Arena. Peabody Park has plenty of parking nearby and is located near many downtown Little Rock attractions and restaurants.

The new park replaces an old wooden playground structure that failed to meet standards applied in 2005 by graduate students at the University of Arkansas. The architect of the new playground is Leland Couch. The construction manager on the site is Jackie Collins. "There's nothing like this anywhere. The uniqueness of this park will get national attention," said Kumpuris.

The Peabody Hotel donated $250,000 for naming rights to the park. Arkansas Specialty Orthopedics contributed another $25,000. The total cost of the park, including labor contributed by Little Rock Department of Parks and Recreation employees, is about $2.2 million. The park is expected to open on Memorial Day weekend 2008.

The most unique thing about Peabody Park is that it is fun for children and big kids alike. There are two main levels to the park: upper, or ground level, and lower. Peabody Park is unlike traditional parks in that the ground areas are covered in a rubbery material. The material has a lot of give to it and puts bounce in your step. The park has two large climbing structures that resemble spider webs. They are made out of a metal rope that allows it to be strong and durable and movable at the same time. There is a large slide that begins at the ground level and ends at the lower level. At the lower level, there are smaller versions of rock climbing walls with hand and foot holds built in to the walls. A maze of tunnels throughout the park allows for many people to be playing in the area at once. The pavilion at Peabody Park is ideal for family picnics and for parents to keep an eye on their little ones. There is a beautiful view of the river and the Junction Bridge. By day, the park has an area of water spouts for people to run through to cool down during the hot summer. The drinking fountain has misters at the top for those who want a quick cool down without getting drenched. By night, the spouts are turned off, but the lights remain on so the park can still be used. The Junction Bridge looks especially beautiful lit up at night.