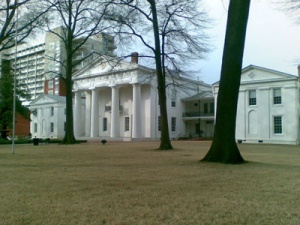 View of the Old State House. Photo by Phil Frana. 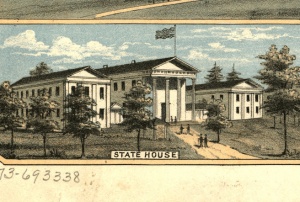 State House in 1871. Drawn & published by A. Ruger. Library of Congress, Geography and Map Division. 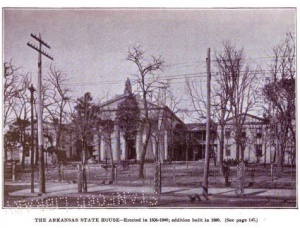 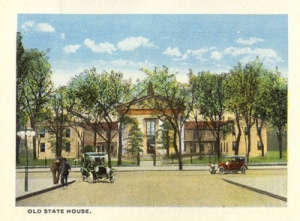 Little Rock's State House is the oldest capitol building west of the Mississippi River that is still in use today.

The Arkansas territorial capitol was originally located at Arkansas Post. The seat of government was removed to Little Rock in 1821. The first meeting of the Arkansas General Assembly took place that same year in a two-room log cabin located in an area circumscribed by Fourth, Fifth, Main, and Scott streets. The General Assembly continued to meet at this site until 1833.

Architect George Weigart was hired to design a new State House in 1833. Weigart died the next year and his original plan suffered from reductions due to financial problems.

The Greek Revival State House opened its doors for the first time in 1836, but remained under construction from March 1833 to 1842. The building is made from handmade bricks. From 1842 until 1911 the Old State House housed both the Arkansas Governor's offices and the State Legislature. (The General Assembly met in Washington, Arkansas, in 1863 when the city of Little Rock was occupied by Union troops.)

In 1947, the Old State House became a museum that features exhibits on Arkansas and Little Rock history:

A hands-on room for kids. The rear end of a caboose is attached to one end of the wall. Children are encouraged to dress-up and make speeches from the caboose.

Documenting the construction and past renovations of the Old State House.

The 8-inch iron-banded cannon on the front lawn is nicknamed "Lady Baxter." It was used to defend Little Rock during the Union attack on Little Rock in the summer of 1863.

The museum is managed by the Department of Arkansas Heritage, and is listed on the National Register of Historic Places. 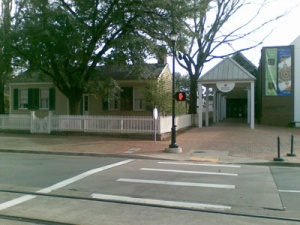 Entrance to the Historic Arkansas Museum in Little Rock. Photo by Phil Frana. 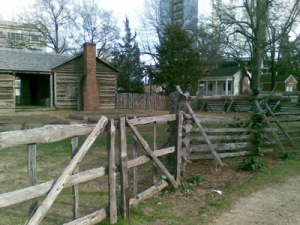 The museum has hands-on exhibits for children in the Sturgis Children's Gallery. The Sturgis Gallery features a magnetic sand table where children can uncover old iron nails and other artifacts, a puppet theater and video monitor, a game called "Arkansas Twister," a dress-up daguerreotype studio, and a choose-your-own-adventure style computer game "Escape to Freedom."

One of the museum's goals is to demonstrate to visitors how early residents of Arkansas would have lived during frontier times. The museum has assembled a pre-Civil War neighborhood, including the Hinderliter Grog Shop, the Brownlee House, McVicar House, and Plum Bayou Log House. The museum also occasionally features costumed "living history" guides.

From September 2 until October 31, 2004, the museum hosted the exhibit Construction Site: Clinton Presidential Center. This exhibit was featured in the Trinity Gallery. The photographs featured were of construction of the center beginning in January of 2003 by Timothy Hursley.

The museum is open from 9 AM to 5 PM on Monday through Saturday, and from 1 PM to 5 PM on Sunday. Admission is free. Tours of the grounds and outbuildings are $1 for children 18 and under, $2.50 for adults, and $1.50 for senior citizens.