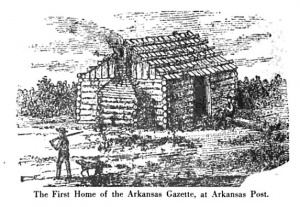 In December 1821 Woodruff moved his press up the Arkansas River to Little Rock. Woodruff remained the official printer of the state government until 1833, when the Arkansas Advocate took over the contract.

The Gazette installed the first typesetting machine in Arkansas in 1894.

The Gazette was the oldest continuously published newspaper in the country until its sale to the Arkansas Democrat on October 18, 1991.