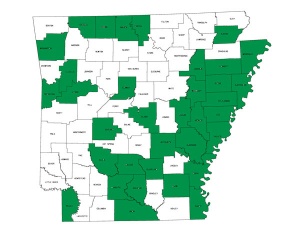 Dry counties emerged in Arkansas in the last quarter of the nineteenth century. The Arkansas Alcoholic Beverage Control (ABC) Board is the administrator of "wet-dry" statuses in Arkansas. Thirty four of the state's seventy-five counties are considered "wet" by the ABC. According to ABC, the retail sale and manufacture of alcoholic beverages is legal in wet counties. In the remaining 41 dry counties, only a private club permit may be issued. Most of the wet counties have dry areas within their borders such as townships or cities. These are considered dry/wet or moist counties. The image to the right is an unofficial illustration of county liquor statuses as of 2010. The official local option status of an area can only be determined by reviewing records at a local County Clerk's office.

Into the time of the Civil War, Arkansas was known to be part of "the land of Dixie and whiskey." As early as the 1810s visitors to central Arkansas complained of traveling bands of swindlers, mercenaries, and traders, many of them "swallowed up in dram-drinking, jockeying, and gambling." By 1820 central Arkansas was so thick with saloons that the state government began taxing them to slow down growth in the business. It didn't work.

The Arkansas General Assembly in 1879 passed a local-option law requiring that Arkansas communities vote on dry county measures at least every two years. An 1885 law closed saloons on Sundays, and an 1899 law outlawed the sale of alcohol from one private citizen to another. In that same year, prominent businessmen and politicians organized themselves into the Arkansas chapter of the Anti-Saloon League. Many counties by 1900 had already made themselves dry. The Anti-Saloon League fell apart around 1906 because of intense rivalries between church member denominations. A state referendum on whether to ban liquor permitting failed by a vote of 69,390 to 85,358.

The Arkansas Liquor Law of 1913, sponsored by nineteen senators, made "it unlawful for any court, town or city council to issue a liquor license except when the same is asked for by petition signed by a majority of the adult white inhabitants (including women) living within the incorporated limits of the town where the license is to be used." Anti-prohibitionists claimed a small victory in that the act allowed saloons and bars to petition county courts for licenses, much like Arkansas bars and clubs do today. The act required that pro-license counties "must have voted 'for license' at the last general election on that subject." The act did not repeal local liquor laws, but made cumulative all anti-liquor laws already in force and decisively tilted state policy against the "wets." The act was adopted on the grounds that it helped guarantee "the public peace, health, and safety."

The Newberry Act of 1915 outlawed the manufacture and sale of alcohol within state borders. In the year of the passage of the Newberry Act, only twelve counties remained "wet."

Liquor sales in hotels and restaurants was permitted under a General Assembly law passed in 1943. An act drafted by the Temperance League of Arkansas failed in election by an 167,578-122,252 margin in 1950. A mixed-drink bill framed by Governor Winthrop Rockefeller passed in 1969. Legislation championed by Senator Lu Hardin in 1993 made local-option votes on wet/dry counties more difficult by raising the petition requirement to 38 percent of all registered voters.

The Dry Counties Coalition (DCC) was founded in the spring of 2009 as a response to the Arkansas Alcoholic Beverage Control (ABC) Board's decision permitting the Inn at Anderson House in Heber Springs to sell alcohol. The group stands against alcohol permits being given to establishments in dry counties. In a rally on May 30, 2009, at the state capital, Larry Thomas and other speakers protested for their cause.