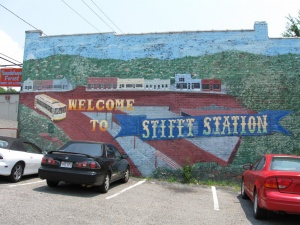 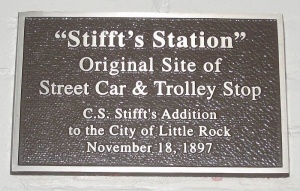 Stifft's Station is a former streetcar stop for The Heights neighborhood of Little Rock located at the corner of Markham and Kavanaugh (formerly Prospect) streets. The station served the Pulaski Heights Line, which operated from 1904 to 1947.

The station is named after jeweler Charles S. Stifft, whose proposed Stifft Addition to the city was platted on November 19, 1898. Other named investors in the addition were Charles' wife Rebecca Stifft, Robert E. Wait and second wife Isabella Wait, and Maxwell Coffman and wife Annie Coffman. Later investors would include Sidney Stifft and Perry Stifft.

The buildings and areas immediately surrounding the streetcar stop are now known collectively as the Stifft Station Historic District. The boundaries of the district are formed by Markham to the north, Woodrow to the east, Seventh Street to the south, and Martin to the west. Other city additions located within the district boundaries are the C. O. Kimball and Bodemann Addition (1890), Beach Addition (1893), Feild's Addition (1911), Hick's Subdivision of Block 4 of Boone's Addition (1912), and the E. F. Feild Addition (1926). Woodruff Elementary School is located at the southeastern corner of the historic district. The Billy Mitchell Boys and Girls Club at 3107 West Capitol Avenue is inside the boundaries of the district, as is Lamar Porter Field at 2700 West Seventh Street.

Nearly all structures in the district were constructed after 1905. The first two homes documented in the district date to around 1914: 522 Martin, owned by Benjamin Robinson, and 600 Martin, owned by Lena Conway. The area is mainly residential, with about a third of the cottage and bungalow homes dating to the 1920s. Most houses are in the Craftsman, Tudor, or Colonial Revival style, and reflect the income levels of moderate, working class families. Some larger homes for middle class residents are found on the 100 block of Johnson Street.

The commercial corridor on the northern edge of the district is the past and present location of a number of businesses. This corridor is now dominated by a large mural painted in 1996 by Roland Burnham, who used to paint alien heads as the tagger "Balstovitch." The neighborhood is also famous for producing a number of talented local musical acts and what has come to be called the Stifft Station Sound.

The residential neighborhood to the east of the streetcar stop is called the Capitol View Historic District. The Capitol View district extends from the Union Pacific Railroad tracks to the campus of the University of Arkansas Medical Center between Markham Street and Interstate 630. To the south is the Central High School Historic District, and to the west the University of Arkansas for Medical Sciences campus. To the north is Pulaski Heights.