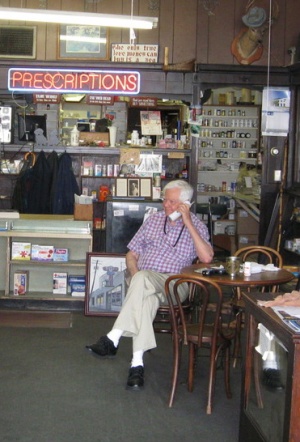 George E. Wimberly (February 3, 1920- ) is manager and druggist at Buice Drug Store in the Hillcrest-Stifft Station area of Little Rock. Wimberly is a former Democratic state representative and past Little Rock mayor.

Wimberly served in the Civilian Conservation Corps in Marion, Iowa, doing farm terracing and erosion control during the Great Depression. He then served on a U.S. Naval Department hospital ship in the Pacific Theater during World War II.

Wimberly began running Buice Drug Store when the original proprietor J. W. Buice died in the 1960s. The store, which opened in 1929, is located at 3013 West Markham Street. The store is notable as a past and present gathering place for police officers, firefighters, and the political elite of the city. The store is located a half mile west of the Arkansas State Capitol.

Wimberly served eight years on the Little Rock Board of Directors and three years on the State Crime Commission during the 1960s, and then served as mayor twice (from 1971 to 1972 and again from 1975 to 1976). He also served ten years in the Arkansas State House of Representatives. Wimberly often ran on "law and order" and anti-tax campaign platforms. In 1987 he authored successful House Bill 1984 which restored the Pulaski County use tax levied on certain purchases made outside of the state. Also in that year he authored the successful House Bill 1083 which abolished the Pulaski County Civil Service Commission, and the successful HB 1433 which prevents employers who provide pharmaceutical benefis from requiring that their employees receive their drugs only from out-of-state mail-order companies. Wimberly also co-authored HB 1802, which strengthened Sunday blue laws by increasing the proportion of necessary foods sales to liquor sales permitted by licensed hotels and restaurants. He also helped make the House chamber a non-smoking room.

Wimberly was named "Pharmacist of the Year" by the Arkansas Pharmacists Association in 1986.