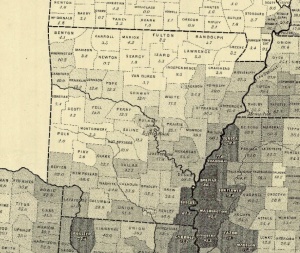 Percentage of slaves among residents of each county in Arkansas. Source: "A Map Showing the Distribution of the Slave Population of the Southern States of the United States, Compiled from the Census of 1860" (United States Coast Survey, 1861).