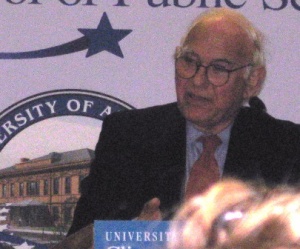 James (Jim) Stewart Polshek is the chief architect of the Clinton Library. He is the founder of the Polshek Partnership and former Dean of the Columbia University School of Architecture, Planning, and Preservation (1972-1987). With his partner Richard Olcott, Polshek in August 1999 won the bid for the Library, a design he called the "Bridge to the 21st Century." Polshek called the building "a very radical departure from any presidential library that's ever existed in anybody's remotest memory."

On February 24, 1999, Polshek had his first interview with the President and his staff members. The Polshek Partnership visited every presidential library in the country, coming away most impressed with I. M. Pei's John F. Kennedy Library in Boston, Massachusetts. The partnership picked three approaches, building models on the villa plan favored by Palladio, the Spanish plaza, and Thomas Jefferson's campus plan. All three of the plans faced the river. Polshek reports that he likes to "fiddle" with models, and these models were given to the president and his team to play with. Taking a trip to the site, Polshek and his group immediately realized that the Library should be flipped sideways in a north-south orientation as the direction of the railroad tracks and the bridge on the site dictated the placement of the building perpendicular to the river and elevated. The placement also pays homage to the two road grids used by the city.

Bill Clinton selected the design after examining a twenty-four foot annotated drawing prepared by Polshek and his firm. Polshek had initially designed a translucent building that would jut out ninety feet over the Arkansas River, but the "Secret Service nixed that," he said. "The concern was that a ship with explosives could pull up underneath. But when you get to the end of the building, you'll feel like you're out on the river." In the end Polshek created a gallery - forty feet in height - located at the halfway point in the museum exhibition space. On clear days visitors can take in a view of downtown Little Rock to the west as well as six bridges across the river. Polshek called the gallery "a place to inhale." Polshek has said that the Choctaw Station represents the "past," the Library represents the "present," and the Rock Island Bridge represents the "future." In 1999 Polshek proposed placing the Choctaw Station inside a glass box to form the Clinton School of Public Service and a Great Hall, but this idea was later shelved.

Polshek's work is often described as Modernist, and the Clinton Library falls into that category. He studied Danish and Scandinavian architecture as a Fulbright scholar, and studied under I. M. Pei in Paris. He is also a student of the Meiji period merger of landscape and building. He describes his approach to such buildings: "I will never be defensive about taking human comfort seriously ... so that there is more nurturing and less swaggering." The Clinton Library was also designed with lots of glass to exaggerate the president's own sense of probity. Explained Polshek, "In a political way, and for reasons that have never been explicitly stated, he's very concerned about openness, which is why he wanted there to be so much daylight." Polshek prefers to work closely with those who pay for his services, rather than impose a favored architectural philosophy.

Polshek's father was a businessperson in Akron, Ohio. Polshek himself began his education in hopes of becoming a psychiatrist, but changed directions in earning a Yale University master's degree in architecture. He started his first firm in 1963, designing first a textile factory and then a Japanese research laboratory. In recent decades he has adopted a much more collaborative approach to architectural design: "Lou Kahn was my teacher, and I think his work, his attitudes, his radicalism, not his artistry, have had a very long and profound influence. I've said it so much, you force me to say it again: the two major historical influences [on me] have been the Cistercian architecture in the late Middle Ages, which is without named architects; and the pre-Meiji great garden designers of Japan, also with anonymous authorship. Renzo Piano's workshop is maybe, among all of us here, a working contemporary office closest to an ideal model."

Polshek, six partners, and 130 employees are responsible for award-winning designs for the Rose Center for Earth and Space at the American Museum of Natural History, the Iris and B. Gerald Cantor Center for Visual Arts at Stanford University, the main entrance of the Brooklyn Museum of Art, Scandinavia House, the Santa Fe Opera Theater in New Mexico, the Flushing branch of Queens Borough Public Library, the Mashantucket Pequot Tribal Nation museum in Connecticut, the Oklahoma City Civic Center Music Hall, and the College Point, Queens, New York Times printing plant. In all of the firm's projects, says Polshek, "We have a reputation for being responsible. I like that, even if it sounds less than exciting."

Polshek works out of the Greenwich Village office of Polshek Partnership in New York City. His most recent completed project is the Newseum in Washington, D.C. He is currently finishing the National Museum of American Jewish History in Philadelphia and the Vietnam Veterans Memorial Center in Washington, D.C. He is also working on the plans for a sewage treatment plant for New York City.