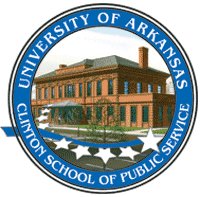 The Clinton School of Public Service is an educational institution affiliated with the University of Arkansas system. The School is located in Sturgis Hall at Choctaw Station on the grounds of the Clinton Presidential Center in Little Rock, Arkansas. The first dean of the Clinton School of Public Service was former U.S. Senator David Pryor. "You look across the way here and you see the library and the archives, and we say that's history," Pryor remarked soon after the Library opening. "You come across the garden, and that's the future -- you're in the school." The second and current dean is Skip Rutherford. Rutherford is past chairman (1997-2006) of the nonprofit William J. Clinton Foundation, which oversaw construction of the Clinton Presidential Center.

The Clinton School offers a two year program culminating in a master's degree in public service. Masters of Public Service degree. Bill Clinton, who often spoke of the "nobility of public service" during his presidency, helped design the curriculum for the school. Some parts of the program are modeled after Boston's John F. Kennedy School of Government. Seven graduate schools of public service with ties to past presidents are located across the United States. Sixteen students comprised the first class of the Clinton School in the 2005-2006 academic year. By 2007-2008 52 students were enrolled in the Clinton School's degree program.

The focus of the Clinton School of Public Service is on education for practical service in the world ("academics for real life" in the words of one student), and not on pure research or policy analysis. In part because the program is still young, students have great flexibility to choose their public service focus. Students must take a core curriculum, a capstone course, and three electives -- electives are generally taken at an affiliated University of Arkansas campus (UALR, UAMS, UA at Fayetteville), though this is not required.

The school fully funds students the summer after their first year on an International Public Service Project. International students are actually enjoined to complete the project in the United States, and U.S. nationals are encouraged to complete the project abroad. The second year involves a one-year individual project. The Clinton School keeps tuition and housing costs to a minimum so that graduates can immediately join the public sector and not have to worry about paying back onerous school bills with private sector employment.

Students may also elect to pursue a joint degree at the Clinton School and UAMS or UALR. About ten students in the current class are spending their first year studying law at the Bowen School of Law, for instance, and will then begin their studies at the Clinton School. Others are enrolled concurrently in the public health program at UAMS.

The Clinton School also expects to expand its course offerings to a number of post-baccalaureate certificate programs.

In December 2007 the Clinton School announced that it was expanding its facilities to the top floor of the old Budget Office in the historic River Market District. The 5,700 square feet of renovated space, expected to cost $1 million, would add two classrooms, as well as conference and meeting rooms. Sturgis Hall contains only two classrooms. The main branch of the Central Arkansas Library System is located nearby. Noted Dean Rutherford, the new facility will "place us closer to the main library and provide our students access to additional study, meeting, and conference rooms." The Budget Office will also house the Arkansas Studies Institute and an archive of papers drawn from UALR's political history collections. "The chance for the students and faculty to use our collection is really good," said CALS director Bobby Roberts. "It is good for them and good for us. They are a high-profile program, and it brings a lot of credibility to what we are trying to do." The third floor Budget Office school facilities are funded by Arkansas General Assembly improvement funds allocated in 2007. The Budget Office facility is expected to open in the Fall of 2008.