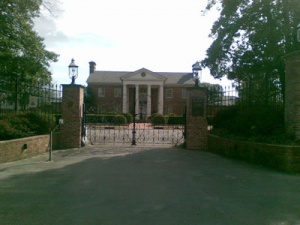 The Arkansas Governor's Mansion, located at the corner of Eighteenth and Center streets in Little Rock, is where the family of the state governor resides during the administrator's time in office. According to the official website, "[e]leven of Arkansas' 45 Governors have lived in the Mansion with their families and pets" following the building's completion in 1950. Before this time there was no established home for the state Governor.

The Governor's Mansion, an example of the Colonial Revival style, was constructed between 1947 and 1950 at the site of an 1840s country estate known as Rosewood. Between 1869 and 1939 the site was occupied by the Arkansas School for the Blind. The area was known at the time as Blind School Neighborhood; it is now called the Governor's Mansion Historic District. The first occupants of the Governor's Mansion were Sid McMath and his wife. Other occupants include Francis Cherry, Orval Faubus, Winthrop Rockefeller, Dale Bumpers, David Pryor, Frank White, Jim Guy Tucker, and Mike Huckabee.

Free tours of the building and the surrounding eight and a half acres are given every Tuesday morning and Thursday afternoon. The public can view the foyer, the library, the formal living room, two atriums, and the dining room in person as well as online.

Only tourists that visit the actual home can revel in the splendor of the Mansions' many gardens. The estate’s six separate gardens, which grow everything from fruit to roses. The Mansion cooks harvest herbs, vegetables, and other greenery for use in cooking as well as decoration. The vegetable garden, with its children’s playhouse - actually a replica of the Mansion itself - is especially popular with visitors.

The Mansion Herbary is managed by the Arkansas Unit of the Herb Society of America. The organic Mansion Vegetable Garden is managed by the University of Arkansas Master Gardeners, and includes a greenhouse, tool shed, composting bins, and the replica Governor's Mansion playhouse. The formal Continental landscaping is called the Parterre Garden, and contains a fountain and pergolas. A secluded Mansion Family Garden provides privacy for the Governor and his family when they are outdoors. The gardens include a Arkansas Native Tree Grove in which can be found oaks, tulip poplars, red maples, magnolias, and loblolly pine. The Mansion Entry Garden contains another fountain, a replica of the one at the Old State House. The entrance garden houses a bronze bust fashioned after Bill Clinton. The effigy honors the former President, a Governor's Mansion resident who dwelled here for twelve years. In April 2008 the Arkansas Governor's Mansion Association announced the completion of renovations on the grounds of the Governor's Mansion. Many of the gardens were redesigned by renowned local garden expert P. Allen Smith.

Last but not least, visitors may meet the First Dog. Currently a German Shepard named Mosel holds the position of "official greeter" at the Mansion. Mosel belongs to the current governor Mike Beebe and his wife Ginger.