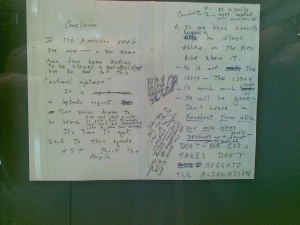 Portions of Dale Bumper's notes from his defense of the president in the impeachment trial on January 21, 1999. Notes on display in Clinton Library museum. Photo by Phil Frana.

Dale Bumpers is a former U.S. Senator and Governor of the State of Arkansas. Bumpers retired from the United States Senate in January 1999.

Bumpers began his career as an attorney in Charleston, Arkansas. He defeated Orval Faubus in the 1970 Democratic primary for Arkansas Governor, then beat incumbent Winthrop Rockefeller to win the governorship. Bumpers is a close friend of former president Bill Clinton, giving the closing argument for the defense during the Clinton impeachment trial.