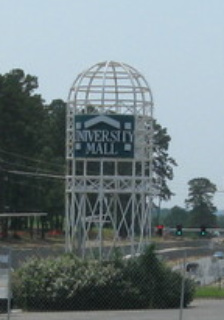 The marquee for University Mall. Photo by Phil Frana.

The developer of the mall was Melvin Simon & Associates of Indianapolis, Indiana, which owned forty shopping centers elsewhere in the country. Local landowners and part-owners in the mall were attorney William J. Smith and John Cella. Smith and Cella acquired twenty-eight acres of land for the mall, which originally included a cemetery since relocated.

The mall was substantially renovated in 1975 and again in 1987. During the second renovation the mall acquired a nine-story Teflon-coated tent covering the new main concourse. University Mall was challenged by other new retail development in the area, especially the expanded and enclosed Park Plaza Shopping Center across Markham Street to the north. In 2001 Montgomery Ward went bankrupt and closed its mall facility. That year only sixty percent of all mall retail space was occupied by tenants. University Mall was closed on October 27, 2007, and demolished between December 2007 and March 2008 to make way for the Park Avenue mixed-use retail and residential development. Park Avenue is expected to open in 2009.