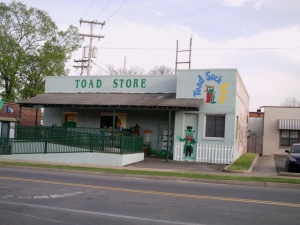 Toad Suck Daze is an annual May festival in Conway, Arkansas. The festival is named for the Toad Suck historic ferry crossing on the Arkansas River just west of the city. Festival proceeds are dedicated to funding academic scholarships for students at local Central Baptist College (CBC), Hendrix College, the University of Central Arkansas (UCA), and the University of Arkansas Community College at Morrilton. Since 1982 the festival has raised $532,000 for such scholarships. The festival has also raised $200,000 in endowment funds for CBC, Hendrix, and UCA.