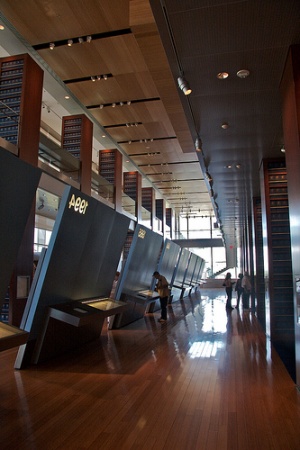 Oversize interactive displays designed by Ralph Appelbaum Associates stand at angles in the center of the exhibit space. Photo by James Hyde.

Ralph Appelbaum Associates (RAA) is designer of the Clinton Library museum exhibits. According to RAA the exhibits "create an immersive, in-depth program that conveys the day-to-day work of the Clinton administration and its impact on people here and around the world." Ralph Appelbaum has said that Bill Clinton himself took an active part in the creation of displays. He called the president the "the editor in chief, the curator in chief, and sometimes the art director."

Towering piers in the main museum space emulate the look and feel of Trinity College Library in Dublin, Ireland, which Bill Clinton admired greatly. The main floor is dominated by a Time Line measuring 120 feet in length presented on a series of eight canted gray metal slabs, one for each year of Clinton's presidency. The Time Line is also divided into sections on "One America," "One World," and "The Economy."

The upper floor mezzanine contains exhibits of biographical material and life in the White House. The exhibit space includes recreations of the White House Oval Office and Cabinet Room during Clinton's administration.

Ralph Appelbaum Associates worked closely with the Polshek Partnership, architect of the Clinton Presidential Center, on prior projects including the Hayden Planetarium of the Rose Center for Earth and Space, and the Museum of the City of New York.