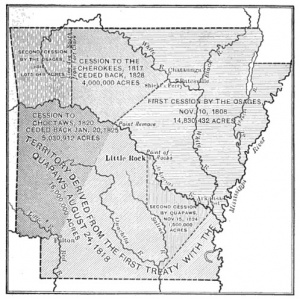 On August 24, 1818, the Quapaw Indians ceded their lands west of present Rock Street in Little Rock to the United States in preparation for a move of the seat of government to the city from Arkansas Post near the mouth of the Arkansas River. The loss of land amounted to 16 million acres in southern and western Arkansas. That same year Pulaski County became part of the Missouri Territory. On November 15, 1824, the tribe ceded the remainder of their lands east of Rock Street, an amount totaling 1.5 million acres. A Quapaw Line monument dedicated to the memory of these two treaties stands today on the southeast corner of Commerce and Ninth streets. The Quapaw were removed by treaty to their present reservation in northeastern Oklahoma in 1834.