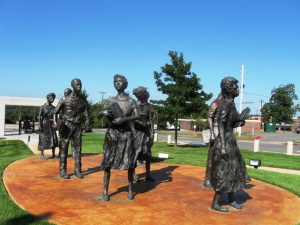 The Little Rock Nine is the name given to a group of nine African-American students who desegregated Central High School in 1957. The Little Rock Nine were initially barred from entering the school by then-Governor Orval Faubus and segregationist "citizens' councils." President Dwight Eisenhower called in soldiers from the 101st U.S. Airborne Division, however, and the students were permitted to attend the school. The Little Rock Nine students were Minnijean Brown, Elizabeth Eckford, Ernest Green, Gloria Ray Karlmark, Carlotta Walls LaNier, Thelma Mothershed, Melba Pattillo, Terrence Roberts, and Jefferson Thomas. Their advisor was the journalist Daisy Bates.

The Little Rock Nine were selected by officials the National Association for the Advancement of Colored People (NAACP) on the basis of grades and attendance records. The NAACP at the time was instrumental in working to desegregate schools in the South after Brown v. Board of Education (1954).

The Little Rock Nine are commemorated in the 2005 sculpture Testament on the grounds of the Arkansas State Capitol.