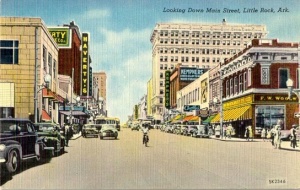 At right, the Kempner Brothers Shoe Store on Main Street.

In the 1940s the store was run by Jimmy Kempner and three older brothers. In that decade the first floor was the shoe department; on the second floor space was leased to another business selling women's dresses and men's suit coats.

Former governor Orval Faubus and his wife used to shop at Kempner's.

The Kempner Brothers Shoe Store burned to the ground in 1916. The present Kempner Building (currently being demolished in 2009) was rebuilt on the site the same year.