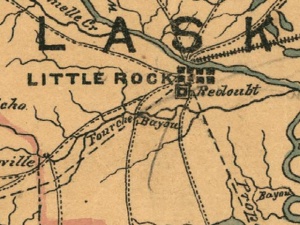 Fourche Creek ("Fork Creek," pronounced locally as "Fush" or "Foosh") is an urban waterway flowing through Little Rock, Arkansas. The mouth of the creek was the site of a Civil War engagement between Union and Confederate Troops called the Battle of Bayou Fourche.

The creek suffered a severe flood in 1973; eight lives were lost. By the mid-1990s the Army Corps Little Rock District had completed a $30 million flood reduction project on the creek.

Audubon Arkansas and the U.S. Army Corps of Engineers are currently attempting to clean up and preserve the creek as prime waterfowl and aquatic habitat. More than $5 million has been allocated to the Army Corps Fourche Creek Urban Rivers Restoration Initiative effort, though not all the funds have as yet been appropriated.