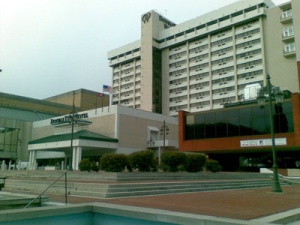 The Doubletree-Little Rock is a hotel located at 424 West Markham Street in downtown Little Rock, Arkansas. The hotel adjoins the Robinson Center, and is near the Statehouse Convention Center and River Market District. The Doubletree opened in 1995.

The hotel was formerly known as the Camelot Hotel, with such architectural flourishes as iron gates and turrets.