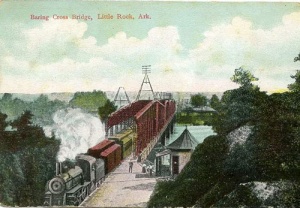 The original bridge washed away in the Arkansas River Flood of 1927. The Missouri Pacific Railroad Company tried to save the bridge by parking coal cars on the structure, but these efforts failed on April 21. A new bridge opened under the same name on February 2, 1929. The Missouri Pacific Railroad added a lift span to the bridge in 1967 to conform with requirements of the new McClellan-Kerr Arkansas River Navigation System.