Spillman Engineering Over the Jumps Carousel 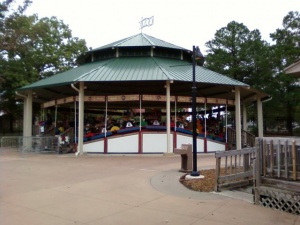 The Spillman Engineering Over the Jumps Carousel (also known as the Herschell-Spillman Carousel) is located on the grounds of the Little Rock Zoo in Little Rock, Arkansas. The carousel was originally erected 1924 on the State Fair midway at War Memorial Park, and is made of wood and cast iron. The carousel was manufactured by Herschell & Spillman Company of North Tonawanda, New York.

The carousel was extensively renovated with the assistance of a group called Friends of the Carousel and moved to its present location around 2008. A time capsule was at this time inserted in one of the horses. The restoration effort was led by Becky Witsell, Rick Parker, and Bob Pennick.