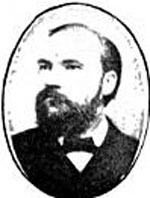 Roots was born on March 26, 1841, to Professor B. G. Roots of rural Perry County, Illinois. He was an 1862 graduate of the Illinois State Normal University. Roots helped recruit the 81st Illinois Volunteers during the American Civil War, and as a colonel in the Union Army rode with General Sherman on his famous "March to the Sea" in Georgia. He was assigned duties in Arkansas during the Reconstruction phase following the war, and became a cotton plantation owner. During his tenure as a U.S. Representative from 1867 to 1871 Roots introduced legislation to create a Southern transcontinental railroad, known as the Texas & Pacific Railway.