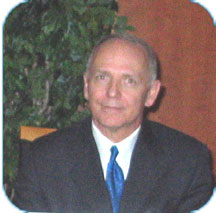 Mayor Jim Dailey at 2004 meeting of the Intergovernmental Advisory Committee of the FCC.

Jim Dailey (b. July 31, 1942) became the 71st Mayor of Little Rock on January 1, 1995. He was the first majority-elected mayor in thirty-eight years. Dailey served two previous years as mayor by appointment of the Little Rock Board of Directors, a group he represented since January 1989. He did not run for reelection in 2006, and was replaced by Mayor Mark Stodola.

As mayor, Daily pushed for the implementation of two revitalization plans to bring Little Rock into the new millennium: FUTURE-Little Rock and Vision Little Rock. The plans resulted, in part, in the revitalization of downtown by encouraging the siting of the Clinton Presidential Center, Heifer International headquarters, and River Market in the city. The former mayor is also credited with improvements to the Millennium Trail, the formation of Central Arkansas Water, and the establishment of the Mayor's Youth Council.

In announcing his decision not to run for office again in 2006 he said, "Little Rock is not the same city it was 15 years ago. It's a stronger city, it's a more vibrant city, it's a city with great potential. That's not a tribute to me, but to the more than two thousand city employees, who work tirelessly every day under the solid direction of City Manager Bruce Moore and the vision of a fine Board of Directors. We are a better city today because the people of Little Rock expect a high standard from their city leaders, and people in both the public and private sectors have stepped up to make it a great place to live. I'm proud to say this is my home."

Dailey is past president of the Arkansas Municipal League. He is member of the Little Rock Regional Chamber of Commerce Board of Directors, the Metroplan Board of Directors, Communities in Schools, Arkansas BioVentures, and New Futures. Dailey is the past Vice-Chair of the National League of Cities (NLC) Steering Committee on Information, Technology, and Communications and serves on the National League of Cities Board of Directors and the Municipalities in Transition on Public Finance. He has also been appointed to serve as chair of the Federal Communications Commission's Intergovernmental Advisory Committee. He is also past president of the National Office Products Association.

Dailey was born in Little Rock in 1942. He received his bachelor's degree in Business Administration from the University of Arkansas. Since 1965 he has been married to Patti Murphy. In the 1970s and 1980s he rose to president of Dailey's Office Furniture Company, a family business. Dailey has two daughters and two sons.