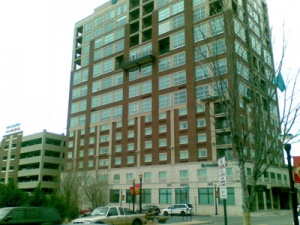 First Security Center is a fourteen-story mixed use office and hotel tower located at the corner of President Clinton Avenue and Sherman Street in the historic Little Rock River Market District.

The building elicited early concerns from the River Market Design Review Committee, which thought that its height might overpower other one- and two-story buildings in the River Market District, but a consensus developed that the facility would draw more people and business to the district. The building is designed to encourage urban density which in turn is expected to ignite urban renewal of other services.

First Security Center is owned and operated by Moses Tucker Real Estate. The architectural firm involved in the planning of the building was Wittenberg, Delony, and Davidson of Little Rock. Construction on the building began in July 2003, under the leadership of CDI Contractors.