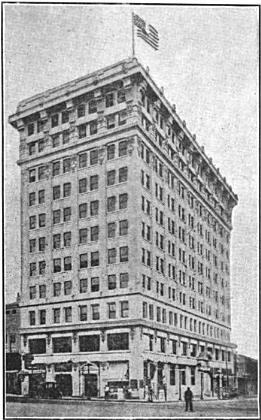 The Boyle Tower is a twelve-story historic office building on the southwest corner of West Capitol and Main streets in downtown Little Rock. The tower was designed by local architect George R. Mann, and constructed between 1909 and 1911. The building was called the State National Bank Building until World War I when the bank declared bankruptcy. The building gets its name from real estate tycoon and cotton trader Johnny Boyle who purchased the tower on December 6, 1916.

The original tower stood eleven stories tall; the twelfth floor was added in 1949. Boyle Tower endured as the tallest building in Arkansas until 1925, when it was surpassed by the thirteen story Lafayette Hotel.

Boyle Tower is today part of the Lafayette Square condominium, office, and retail complex. Lafayette Square incorporates five renovated buildings: the Lafayette Hotel, the Arkansas Building, the Kahn Building, Boyle Tower, and the former M.M. Cohn Department Store. The complex is owned by Tower Investments LLC of Woodland, California. Part of the tower is occupied by The Fletcher Firm, and architectural company.