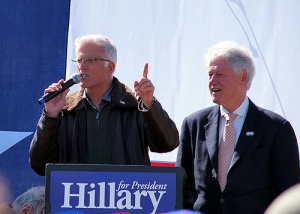 Ted Danson is an Emmy and Golden Globe-winning actor. He is most famous as bartender and washed up baseball player Sam Malone on the sitcom "Cheers," which had an eleven year run.

He is married to Little Rock native Mary Steenburgen. Steenburgen is a close friend of Bill Clinton and the couple occasionally were invited by the president to sleep in the Lincoln bedroom at the White House. "The first time [the president] met me he embraced me up and down. It was very intimidating," remembers Danson. "There I was, about to ask Mary to marry me and he was giving me the once-over."

Danson was born in San Diego, California, and raised outside Flagstaff, Arizona. He was awarded a bachelor's of fine arts in drama degree from the Carnegie Institute of Technology in 1968.