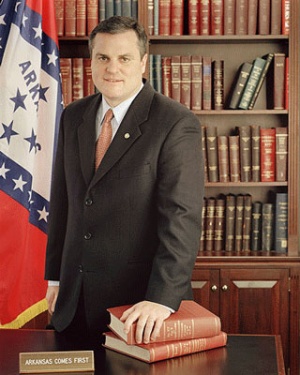 Mark Pryor is United States Senator from the State of Arkansas.

Mark Pryor(D-AR), son of former Arkansas Senator David Pryor, was born in Fayetteville, Arkansas, on January 10th, 1963. Graduating from the University of Arkansas in 1985 with a B.A. in History, he would later repeat this feat in 1988 for his Juris Doctorate. He went on to be elected into the Arkansas State House of Representatives in 1990, serving until 1994. During his time in the House he became known for his numerous bipartisanship legislation efforts. In 1998 he was elected as the State Attorney General for Arkansas, and served for three years. While in office he held the achievement of being the youngest chief law-enforcement officer in the country.

The year 2002 marked the beginning of a long Senatorial career for Pryor, who is due for Democratic reelection in 2008. While in the 108th Congress he served as a member of the Senate Armed Services Committee, introducing onto the floor the Tax Relief for Americans in Combat Act. In the 109th Congress Pryor was a member of the "Gang of Fourteen," a bipartisan group that attempted to avert what was seen as "a political meltdown" in the Senate itself. Currently in the 110th Congress he is busy participating in numerous committees, numbering among them the Senate Commerce, Science, and Transportation Committee and the prestigious Homeland Security and Governmental Affairs Committee. He is one of only a handful of senators to be a member of six committees at the same time.