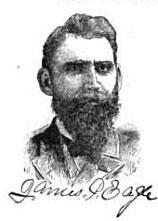 James Philip Eagle was the sixteenth governor of the state of Arkansas from January 8, 1889 to January 10, 1893.

During the Civil War James Philip Eagle served in the Confederate Army's Fifth Arkansas State Troops before falling under the leadership of Colonel James McIntosh of the Second Arkansas Mounted Riflemen. He was promoted several times, eventually to the rank of major. During his service he fought in the Battle of Murfreesboro, where he was captured and later exchanged, and was present at Hominy Creek, Elk Horn, Farmersville, Pea Ridge, Richmond (Kentucky), Murfreesboro, Chickamauga, Dug Gap, Franklin, Nashville, and Bentonville. He was wounded in battle at Peachtree Creek near Atlanta. He surrendered with his regiment in Greensboro, North Carolina.

Returning home from the war in 1865 he discovered his home in ruins from the war and his family in flight to Austin, Texas. James built a new home and attended Mississippi (Baptist) College in Clinton, Mississippi, where he became an ordained preacher of the Missionary Baptist Church. He ran the Arkansas Baptist State Convention for ten years. Eagle served several terms in the state legislature beginning in 1872, eventually rising to the position of speaker of the house. He was elected governor in 1888, and reelected in 1890.

Eagle was born in Maury County, Tennessee, on August 10, 1837. His ancestors emigrated from Switzerland in 1743. His father James Eagle settled in rural Pulaski County (now Lonoke County) in 1839, where he ran several farms and owned about thirty slaves. His mother was Charity Swaim. Eagle married Kentuckian Mary Kavanaugh Oldham on January 8, 1882.