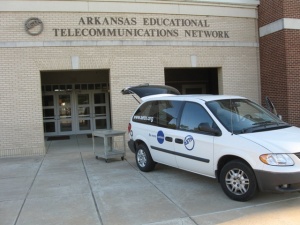 The AETN Building on the UCA campus. Photo by Phil Frana.

The Arkansas Educational Television Network (AETN) is a public television provider headquartered on the campus of the University of Central Arkansas. The current 69,000 square foot AETN studio (called "Network Master Control"), located next door to the Brewer-Hegeman Conference Center and the Reynolds Performance Hall, was constructed in 2001.

AETN passes all broadcasts from Conway's R. Lee Reaves Center for Educational Telecommunications by microwave interconnection to five analog and five digital broadcast transmitters. The analog transmitters are scheduled for transition to digital in 2009.

The address of AETN is 350 South Donaghey Avenue in Conway.

The Arkansas Educational Television Association was established on June 4, 1954. Public television received state support beginning with the passage of Act 198 in 1961. R. Lee Reaves was appointed as the first director of AETN. Under his leadership the first broadcast of the station began at the Arkansas State Teachers College in Conway on December 4, 1966. General program areas today include AETN-HD for all audiences, AETN Kids for children, and AETN Scholar for students.