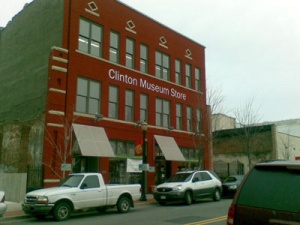 The Clinton Museum Store is a gift shop and office building located at 610 President Clinton Avenue in the River Market District of downtown Little Rock, Arkansas. The store is managed by Connie Fails. Offices of the Clinton Foundation are located on the second floor.

The store sells "The Bill Clinton Collection" compact disc, which contains a selection of the former president's favorite music. On the disc are "My One and Only Love" by John Coltrane, "Harlem Nocturne" by David Sandborn, "My Funny Valentine" by Miles Davis, "The Town I Loved So Well" by Phil Coulter, "There Will Never Be Another You" by Art Tatum, "Summertime" by Zoot Sims, "In the Presence of Jehovah" by Mickey Mangun, "Nostalgie" by Igor Butman, "I Wish I Knew How It Would Feel to Be Free" by Nina Simone, "Take My Hand, Precious Lord" by Mahalia Jackson, and "Chelsea Morning" by Judy Collins.

The gift shop also sells a selection of Bill Clinton's favorite books, including Maya Angelou's I Know Why the Caged Bird Sings, the Collected Poems of W. B. Yeats, Thomas Wolfe's You Can't Go Home Again, and Thomas à Kempis's The Imitation of Christ.

The store, located at 610 President Clinton Avenue, was renovated with the assistance of a $2 million loan from Metropolitan National Bank.