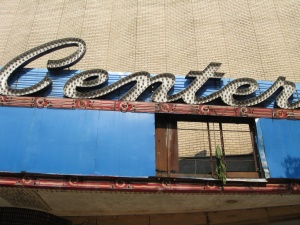 The Center Theater is a defunct "first-run" movie house at 407 Main Street in Little Rock, Arkansas. Plans for the Rowley United-owned theater were first announced on June 20, 1948. The theater was designed by local architects Frank Ginocchio and Edwin B. Cromwell. The Center Theater was built on the site of the old Royal Theater.

The Center Theater is one of five former movie houses located along Main Street. The others were the Capitol Theatre, Main Theater, the New Theater, and the Roxy Theater.

The Center Theater is owned by Stephens Group chief executive officer Warren Stephens, who purchased the structure in 2001 for $125,000. A $2.5 million plan to turn the building into a 281-seat dinner theater venue, art-house theater, or make it the anchor for a new downtown "theater campus" is apparently moribund and the theater is slated to be torn down in 2009.