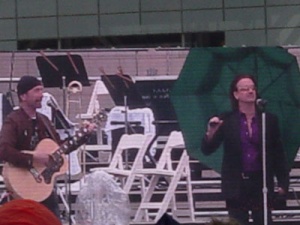 The Edge and Bono perform at the Clinton Library dedication. Photo by Elizabeth Youngblood.

Bono is frontman of the rock band U2. The rock legend sang "Rain" by the Beatles, "Sunday Bloody Sunday," and "The Hands That Built America" backed by The Edge at the Clinton Presidential Center dedication ceremony in November 2004. In his biography, My Life, Bill Clinton remarked that both performers had made the effort to thank him for his efforts to bring peace to Northern Ireland. Bono's handwritten lyrics to the song are on exhibit in the Library Music Room designed by Kaki Hockersmith.

Wrote Clinton in My Life: "Bono got a good laugh when he sang, 'when the rains came, we got four Presidents out of bed.' Coming so soon after an intensely fought election, the bipartisan spirit seemed to lift the country."

Bono became friends with the President in 1992 when Clinton allowed the rock group U2 to join his entourage in traveling to a Chicago Bears game. Said Clinton later, "I saved them an hour, and we were friends for life." Clinton and the rock group had been staying at the same hotel and became friendly. "Bono gave me a signed copy of poems by William Butler Yeats with a hilarious inscription from him that said, 'Bill, this guy wrote some good lyrics, too,'" he noted.