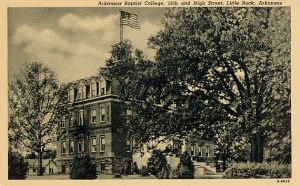 Arkansas Baptist was established in 1884 as The Minister's Institute by the Colored Baptists of the State of Arkansas. It remains the only black, Baptist school of higher education west of the Mississippi River.

In addition to academics, spiritual life, and other cultural activities the ABC Buffaloes athletic teams are a source of pride for the school.