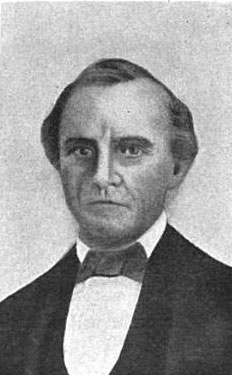 Yell was born in North Carolina in August 1797. He moved to Bedford County, Tennessee, as a child and eventually became a captain in Andrew Jackson's guards during the war against the Creek and Seminole Indian tribes. He fought at the battles of Talladega, Emucfau, and Horseshoe Bend. Yell also fought with Jackson in the war against the Seminole tribe. After the Indian wars, Yell studied law in Tennessee.

In 1832 President Jackson appointed Yell to the position of receiver of public monies for the Little Rock Land Office. He was the first representative to the U.S. Congress from the new state of Arkansas in 1836. He was elected Democratic governor in 1840. He became a brigadier general during the Mexican War, and was killed in action at the Battle of Buena Vista on February 22, 1847. He is buried at Evergreen Cemetery in Fayetteville.