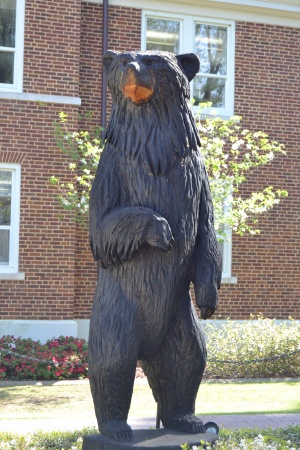 The War Memorial Trees are donned with freestanding plaques instead of hanging from each tree in order to represent the valor and bravery of soldiers who independently stand post and keep guard. Each plaque is a beautiful bronze to reflect the World War II era.

In order to accommodate persons of all abilities, the plaques are positioned at a height that can be easily read by those in wheelchairs. The plaques are located next to the sidewalk near each memorial tree and are implanted in semi-circular concrete pads that hold metal stakes so that the posts stand erect, similar to a soldier's stance, and represent the solid foundation of soldiers in the community, past and present.

In the decades since the trees were planted, the placement of the War Memorial trees was not clearly defined. In 2014, an ad hoc committee worked to identify the War Memorial Trees and subsequently marked each of them with a soldier's name. The committee called upon the assistance of Steven Karafit, biology professor, who helped them identify oak trees on campus that were likely planted in the 1946 era.

Donations were secured from local businesses for the concrete, steel, form material, powder coating and other items needed to construct the plaques. Once the donations were secured, members of the Conway chapter of the Marine Corps League divided into four volunteer work parties and worked several days to prep and fabricate the 47 sites. The work teams consisted primarily of Vietnam era veterans and some Desert Storm veterans.

The plaques are specifically placed near locations of original military buildings on the UCA campus, and each plaque representing an individual soldier was placed near where they would have served according to each soldier's rank. Newer trees have since been designated for those that have been lost.

UCA also unveiled a polished, black granite World War II Memorial in 2003. Names of the fallen alumni are etched with gold lettering on the commemorative structure that sits outside McAllister Hall. The name of the memorial and an explanation of the Memorial Trees are on the south face of the monument and the names of the deceased alumni and an epitaph is on the north face. The monument carries the name, rank and branch of service of each alumnus.

As thousands of students, faculty, staff and visitors walk beneath the shade of the stalwart oak trees across the UCA campus, they now have the opportunity to be aware of the story behind the trees and be reminded of the sacrifices that were made by members of their community.

-- The Living Tree Memorial brochure, printed by the University of Central Arkansas.