Second Lieutenant James Phillips entered into service on September 2, 1940. He served with the 429 Bomber Squad as a member of the U.S. Army Air Corps. His service number was O-426197. 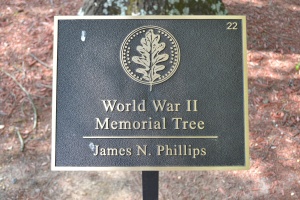 James Phillips was born on June 2, 1918 to parents James N. B. Phillips and Josie Phillips in Jasper, Arkansas. He attended the Arkansas Polytechnic College, from which he graduated in 1938, before transferring to the Arkansas State Teachers College (now University of Central Arkansas) in 1938.

Lieutenant Phillips died non-battle on July 18, 1942 when the "Flying Fortress" airplane of which he was a crew member, crashed in North Reading, Massachusetts. His is buried in the Jasper Cemetery in Jasper, Arkansas (Newton County).